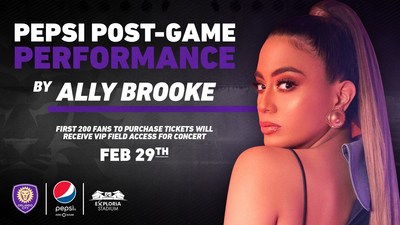 «As a brand that takes pride in our rich heritage in sports, we’re honored to join Orlando City SC, Orlando Pride and Exploria Stadium as their new non-alcoholic pouring partner,» said Derek Lewis, South Division President, PepsiCo Beverages North America. «Orlando is our South Division’s hometown; many of our employees, customers and community members are huge fans of the teams, and we’re excited to be able to bring them incredible experiences and memories with our new partnership.»

To kick off the exciting new partnership, PepsiCo Beverages North America and Exploria Stadium will host a special post-game concert free for all ticketed fans after Orlando City SC’s regular season home opener on Saturday, February 29. As a celebration of the partnership, the concert will feature an on-field main-stage performance by singer Ally Brooke.

«We are thrilled to welcome PepsiCo Beverages North America to the Orlando City SC family, as this partnership signifies another strong investment in our Club, our supporters and the sporting experience we offer here in Central Florida and to soccer fans around the world,» Orlando City SC CEO Alex Leitão said. «We are excited for the opportunities and experiences we will be offering our fans through this partnership and we look forward to celebrating our new relationship, and showcasing Exploria Stadium, with Ally Brooke’s show on February 29.»

The first 200 fans to purchase tickets to the February 29 match using the link here will receive VIP field access for the post-game concert and get to experience the show from the once-in-a-lifetime location. An allotment of VIP field access has also been reserved for Season Ticket Members. STMs will be contacted next week with more information.

About PepsiCo:
PepsiCo products are enjoyed by consumers more than one billion times a day in more than 200 countries and territories around the world. PepsiCo generated more than $67 billion in net revenue in 2019, driven by a complementary food and beverage portfolio that includes Frito-Lay, Gatorade, Pepsi-Cola, Quaker and Tropicana. PepsiCo’s product portfolio includes a wide range of enjoyable foods and beverages, including 23 brands that generate more than $1 billion each in estimated annual retail sales.

Guiding PepsiCo is our vision to Be the Global Leader in Convenient Foods and Beverages by Winning with Purpose. «Winning with Purpose» reflects our ambition to win sustainably in the marketplace and embed purpose into all aspects of the business.  For more information, visit www.pepsico.com.

Orlando City SC joined Major League Soccer (MLS) as the league’s 21st franchise in November 2013, becoming the first MLS team in the Southeast. The Lions began league play in March 2015, and in 2017, moved into its privately-owned downtown soccer stadium. In 2019, Orlando City SC launched OCB in the newly-formed USL League One to bridge the gap between its successful youth development academy and the First Team.

In November 2015, the Club announced its intention to bring professional women’s soccer to Central Florida and launched Orlando Pride in the National Women’s Soccer League. The Pride began league play in April 2016 with a star-studded team of FIFA World Cup Champions. For more information, visit orlandocitysc.com or orlando-pride.com.