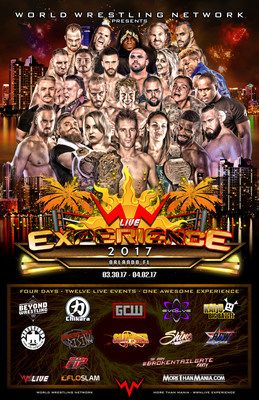 In addition, there will be a special event that will make all other tailgate parties obsolete on WrestleMania day. The Hardy #BrokenTailgate will take place on Sunday, April 2nd from 10AM-6PM EDT Outside of Saddle Up; 100 N. Orange Avenue; Orlando, FL. It will feature picture and autograph opportunities with Matt Hardy, Jeff Hardy, Queen Rebecca, Senor Benjamin and King Maxel plus a full bar, BBQ and live wrestling from the FIP and ACW brands (Live streams available at www.FloSlam.tv ). This is just over a mile from WrestleMania with public transportation available.

The top independent wrestlers from all over the world will collide at The WWNLive Experience. Each brand will bring its own unique roster and flavor to this unprecedented happening. The lineup includes:

EVOLVE Wrestling: This prestigious wrestling promotion is known for presenting the top talent and cutting edge wrestling. EVOLVE has formed a relationship with WWE that has seen many EVOLVE talents join the WWE and NXT rosters. This is where wrestling fans can get ahead of the curve and witness top shelf pro wrestling. EVOLVE will have events on March 30th at 8PM EDT and March 31st at 4PM EDT. Live streams available at www.FloSlam.tv.

PROGRESS Wrestling: The underground sensation from the United Kingdom comes to the United States for the first time on March 31st at 12PM EDT. PROGRESS, which was recently featured on WWE.com, is bringing a roster of the top male and female wrestlers from the red hot British scene. You will see several competitors who appeared in the WWE UK Title Tournament earlier this year. Live stream available at www.wwnlive.com.

WWN Supershow: Mercury Rising 2017: The big event is a culmination of all the action and stars of the WWNLive Experience. This year will see history made when a Battle Of Champions Elimination Match determines the first World Wrestling Network Champion. Plus, there’s a can’t miss EVOLVE vs. PROGRESS series of matches, SHINE Women’s Title Match and much more at 8PM EDT on April 1st. Live stream available at www.FloSlam.tv.

SHIMMER Women’s Athletes: SHIMMER has been the destination promotion for serious, athletic women’s wrestling for over a decade. SHIMMER is presenting a card full of top notch independent women’s wrestling on April 1st at 12PM EDT. Live stream available at www.wwnlive.com.

CHIKARA: This is known as one of the most unique and innovative independent wrestling promotions. They have created a universe of imaginative characters that have taken fans to new dimensions. CHIKARA joins the WWNLive Experience for two big events on March 31st at 8PM EDT and April 1st at 4PM EDT.

Game Changer Wrestling: What happens when you hit up Joey Janela and ask him to book a show for you in Orlando as part of the ‘More than Mania’ experience? You end up with «GCW presents Joey Janela’s Spring Break!» This promises to be one of the most unique and unpredictable events of the weekend and will be an event you don’t want to miss at 11:55PM EDT on March 30th. Live stream available at www.FloSlam.tv.

Beyond Wrestling: The cult favorite has built a diehard following in New England. Now they will expand to the WWNLive Experience for the first time with an incredible 11:55PM EDT card on April 1st. This is your late night fix for amazing action. Live stream available at www.FloSlam.tv.

Kaiju Big Battel: Monsters are real! Kaiju Big Battel is fun and crazy monster wrestling. It will be a «civil war» for this late night tradition at 11:55PM EDT on March 31st. Live stream available at www.FloSlam.tv.

Go to www.WWNLive.com for more information on the WWN brands.

To view the original version on PR Newswire, visit:http://www.prnewswire.com/news-releases/theres-more-than-wrestlemania-happening-in-orlando-fl-on-march-30–april-2nd-300431288.html